Tag: dancing with the stars

Dancing With The Stars: Week One

by Laura Elizabeth
Comments are off
DWTS, New Photos, Television

Wow! Did you see #TeamMarkingjay KILL it? If not, don’t worry! Watch Willow and Mark on Week One of the 10th anniversary season of Dancing With The Stars below! Willow and Mark did the cha-cha to “Lips Are Movin” by Meghan Trainor! Way to go! I have also added some stills of the dance as well as over 150 screencaps from the show to the gallery. Now for the most important part: voting. Click HERE to find out where and how to vote! Let’s get them to number one!

Team Markingjay: How to Vote

by Laura Elizabeth
Comments are off
DWTS, Television

Michele over at MarkBallas.com has written instructions on how to vote and keep Team Markingjay on Dancing With The Stars for as long as possible. Be sure to read below if you are not familiar with the show/voting process. Thank you Michele!

Looking forward to watching Willow Shields and Mark Ballas dance on Dancing With the Stars? If so, remember they will not get to keep dancing without the help of the fans. Not familiar with the show? Here is some basic information about how the show works and how you can keep Team Markingjay dancing!

The couples dance on Monday nights for a score from the judges. Then the fans vote for their favorite. The judges’ score counts 50% and the fans 50%. The key to the judges’s score is that they convert it to a percentage. They take all the scores from the judges and add them together. Then that number is divided into the score for the individual couple. That gives the 50% that counts as the judges scores. Same thing with the fan vote. All the votes are totaled and that number is divided into the couples fan vote. The lowest combined judges scores and fan scores send a couple home.

The first is by phone. The number for Team Markingjay is 1-855-234-5612. The number will remain the same throughout the competition. Phone lines open as soon as the show starts and stay open for one hour after the show ends for each time zone. You can only phone vote during this time frame for your time zone. For example: New York residents would phone vote from 8PM-11PM EST. California residents can not phone vote until the show airs in their time zone. Fans should try to vote as soon as the show starts. After they dance and at the end of the show are hardest times to get through and we want every single vote. You can vote on as many phones as you have access to.

Fans can also vote on Facebook through the Facebook voting account, https://apps.facebook.com/votedwts. You can vote from 8PM EST on Monday to 8PM EST on Tuesday with this option.

The final way is online. In order to vote online, you must have an account. Fans go to www.abc.go.com/shows/dancing-with-the-stars. At the top of the page in small print is a place that say Join. Click on this and it will walk you through the process of making an account. Fans should make their accounts before the show starts because when the show is going the site crawls. There is no limit to how many online accounts you may have, but each must be attached to a valid email. voting times for online voting are 8PM EST on Monday to 8PM EST on Tuesday.

So that’s how you do it! Season 20 is going to be a very competitive season! Please keep Team Markingjay dancing by sending votes their way!
–MARKBALLAS.COM

Dancing With the Stars: Team Name

by Laura Elizabeth
Comments are off
DWTS, Television 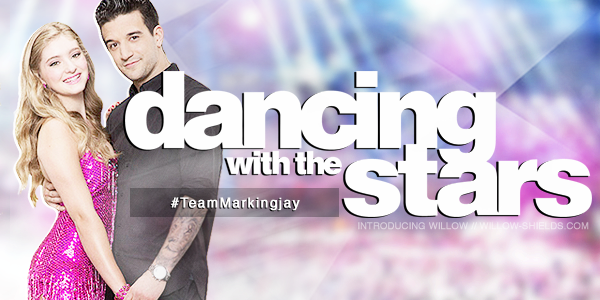